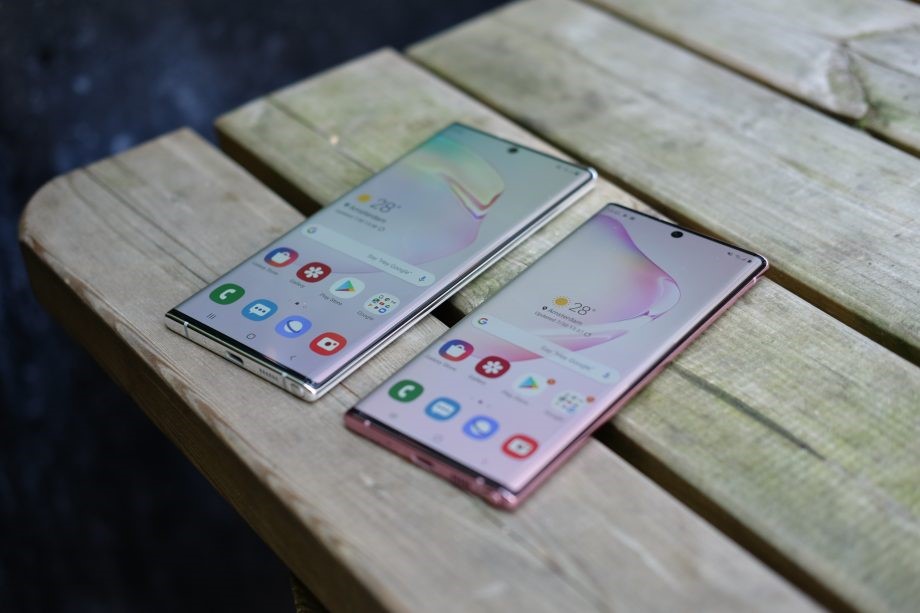 We would take you through the specifications, cost, and availability of the Samsung Galaxy Note 10 and Note 10 Plus.

The first thing that you will notice is the phone’s size. It’s larger in size than most of the phones in the market. Might be the largest then you have ever used before.

The display is of 6.8 inches with a resolution of QHD (3040 X 1440). It is equipped with an AMOLED Infinity O screen that translates to 498 pixels per inch, resulting in a high quality display.

The dimension of Note 10 is 77x162x7.9mm. Though it is a big phone, it is not heavy in comparison to the size. It weighs only 196gms. The phone is ergonomically designed and it perfectly fits in your hand. The curved edge on the corners makes it look attractive.

Apart from the eye-catching design, the phone has a superior build.The back of the phone has a high-quality glass finish and the frame is made up of premium quality metal. Such phones are generally delicate, and so it Notes 10. Therefore, if you are the one who drops their phone frequently, it’s advisable to get a case.

The USB-C connector and a slot for the S Pen are provided at the bottom edge of the phone. On the right-hand edge, you will find the power button and volume controller.

Point to be noted is that this phone doesn’t contain Bixby button which is found in almost all other modern Samsung phones. In Note 10, this feature is combined with the power button where you just need to hold the button for a few seconds and it triggers the voice assistant. This is similar to the mechanism of Siri and Google Assistant of high-end smartphones.

Note 10 comes with a unique feature. It is IP68 dust and water-resistant. Hence there is no need to worry if the phone comes into contact with water or dust. The dust will not be able to block the ports of the phone.

Though the phone has many great features, the problem is that it would be a little difficult to use the phone with one hand. It is best for the people who intend to hold the phone with both the hands and use the S pen comfortably.

We will use the phone for longer durations to understand and confirm how ergonomically the phone is designed, but by the very first look, it depicts that you will be able to use the S-pen while you are standing still on a plain surface.

You will get 3 color options in Note 10 – Aura Glow, Aura Black, and Aura White. All the colors might not be available in the market currently however, you may want to check.

Now coming to Note 10 plus, it is even better in resolution than Note 10. The QHD resolution and higher spec display make it one of the attractive phones available in the market.

Both Note 10 and Note 10 plus has an Infinity-Of display, which means there is no notch in front of the phone and it is full screen like Galaxy S10 and Galaxy S10 Plus. There is a punch-hole cut out for placing a 10 MP front-facing camera, on the top center of the screen. 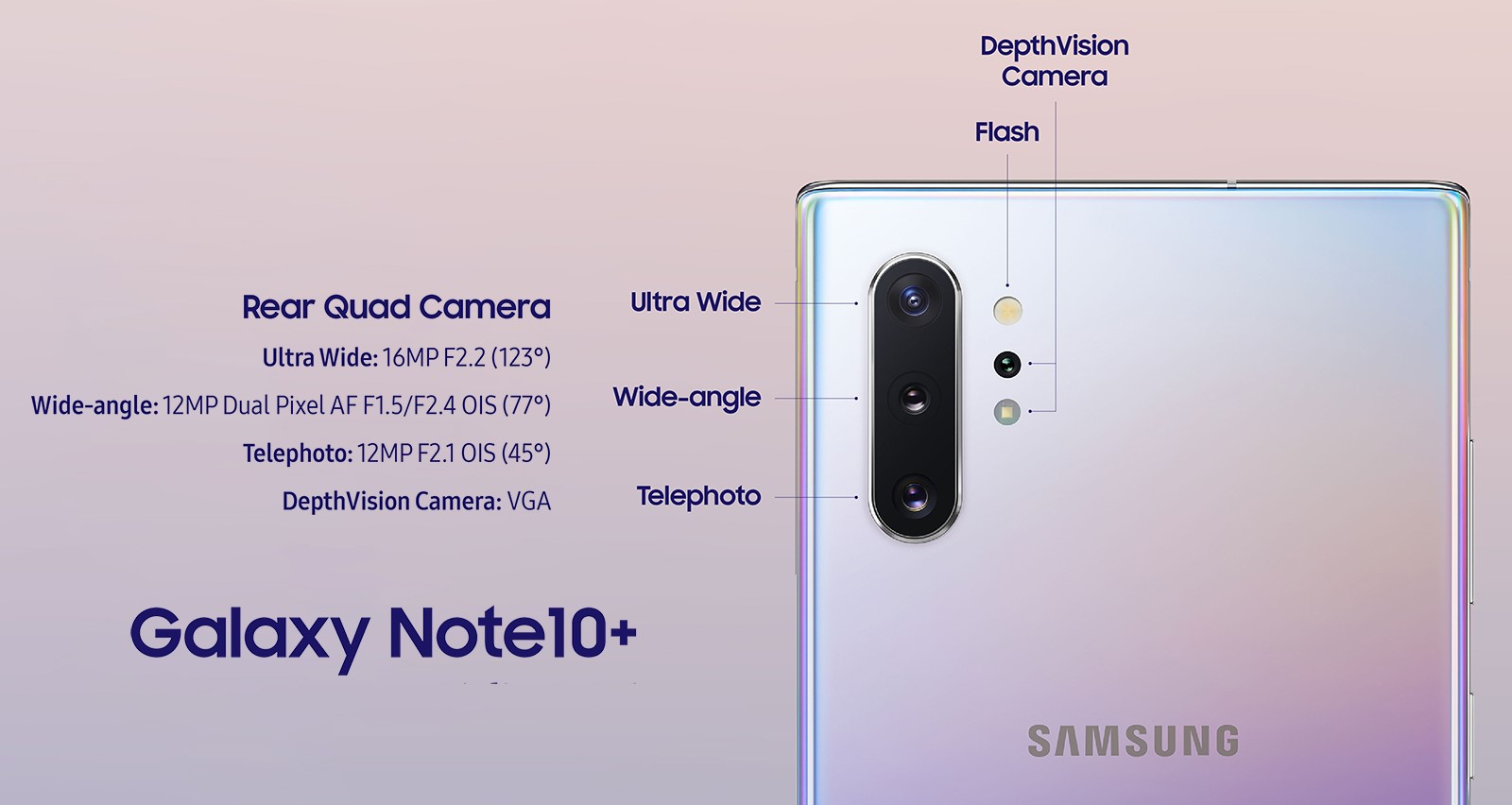 Galaxy Note 10 plus does not have a very extraordinary camera. The camera’s setup is quite similar to the other Samsung phones that have been launched lately. It has a 12MP regular lens, 16MP f/2.2 ultra-wide lens, and 12 MP f/2.1 telephoto lenses. The camera is equipped with the Depth Vision feature. The feature assists in sensing depth and provides a natural and illustrious effect to the photos. This is something that is missing in Galaxy Note 10.

You get to enjoy the bokeh effects on your video clips and live photos. Bokeh effect blurs the background of your photo, focusing on the subject.

Though this feature is available on the standard Note too, however, this worked much better in Note 10 Plus. The credit goes to the phone’s Depth Vision camera.

Apart from this, there is this ‘augmented reality’ mode. This mode allows you to draw on your video clips. You get a chance to edit your videos to make them more interesting. The phone also has a Zoom-in mic feature which lets you get clear audio whenever required while you are busy recording a video.

3. Specifications of Note 10 plus

Note 10 plus comes with an advanced S Pen which also supports gesture controls. The S Pen which has undergone massive transformation is what makes the Note 10 worth having. It imparts flawless receptiveness and is compatible with Bluetooth. This lets you control the apps and camera with ease even without touching the phone.

Samsung Note 10 Plus has 12GB RAM and allows you to choose among 256 GB and 512 GB built-in storage. The 512GB variant comes with a microSD card that lets you extend your storage to 1 TB.

The battery of the phone is of 4300mAh cell which lasts for 24 hours on a single charge.

In addition, the phone has a wireless charging facility and has a PowerShare feature. This feature converts your phone to a wireless charger; hence you get a chance to charge other gadgets using your Note 10 plus phone.

Galaxy Note 10 plus is powered by Samsung’s Exynos 9825 chip similar to other Samsung phones.

Galaxy Note 10 and Note 10 Plus were launched at Samsung’s Unpacked 2019 event. The phone is available in the market since 23rd August.

Samsung Trade Up has already got its trade-in page up and running. The carriers are working on contract deals for the handset.

2 Replies to “A glance through at the Samsung Galaxy Note 10 and Note 10 Plus: Price, Availability, and Review”